What’s Happening to My Wages?

This article was written by Irina Stucere.

National Minimum Wage rates are due to increase in line with inflation, as the cost of living continues to soar. Workers across the country will soon be receiving a raise in their hourly wage, but when will this come into effect?

The National Minimum Wage (NMW) was introduced in 1999, a flagship policy of the Labour Party during their successful general election campaign in 1997. Enforced by law, the NMW ensures all contractual workers are paid what can be deemed as a reasonable, minimum hourly rate for the work they carry out. Minimum wages differ depending on age and whether you’re an apprentice.

The NMW rises every few years, mainly correlating with increased costs of living.

Following recommendations from the Low Pay Commission, the Government has announced both the National Living Wage (NLW) and National Minimum Wage rates will increase this year.

The National Living Wage is higher than the National Minimum Wage and applies to workers over the age of 23.

From 1 April 2022, both the National Living Wage (those aged 23 and over) and the National Minimum Wage (for those aged 16 – 22) are to increase. The new hourly rates and increases are as follows: – 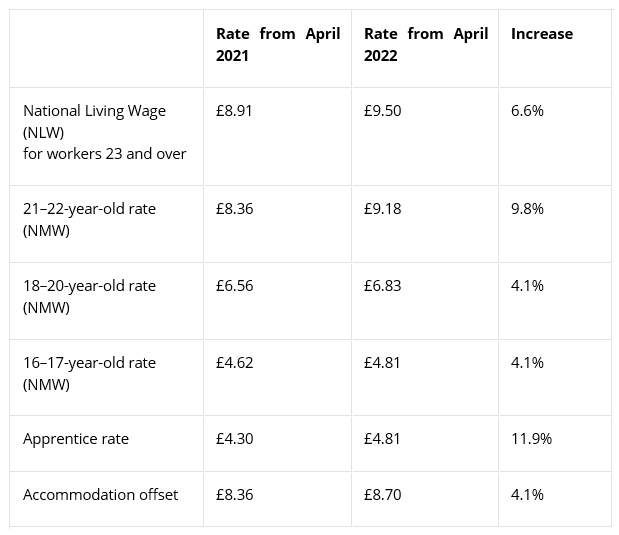 This is the sharpest increase of all groups, narrowing the gap with the NLW – reportedly putting the age group on track to receive the full NLW by 2024.

The 18-20 and 16-17-year-old age groups will also experience an increase in line with underlying wage growth, protecting earnings for young workers while recognising their higher risk of unemployment.

The above increases will benefit over two million lower paid workers.

In the Spring Statement, the Chancellor has announced that the lower limit for NICs will be raised by £3,000.

The limit before Class 1 NICs are payable will be £12,570 (aligned with the standard personal allowance) but this will not take effect until July 2022.

This will represent a saving of around £330 per annum for many employees.

The new Health and Social Care Levy will come in to force to pay for reforms to the care sector and NHS funding in England.

The levy will apply to earnings from 6 April 2022, although will operate slightly differently in the tax year 2022/23 compared to future tax years.

Class 4 National Insurance Contributions paid by the self-employed on profits.

In 2022/23, this will operate as a simple increase of the National Insurance Contributions (NIC) rates, so only those liable to pay NIC will be subject to the levy.

From 2023/24 onwards (once HMRC has developed new systems) the levy will operate as a separate payment to National Insurance Contributions, and it will also apply to those above the State Pension age, which is currently not the case for Class 1 Primary and Class 4 NIC.

This will increase NIC specially in the first 3 months of 2022/23 tax year before the new NI threshold comes into place.

All eligible employees (and some workers) are entitled to receive Statutory Sick Pay (SSP). From 6 April 2022, the rate will increase to £99.35 per week (from £96.35). For eligibility purposes, the lower earnings limit (LEL) will increase from £120 to £123 per week; this will represent the first increase to the LEL for two years.

← Pinch the Penny to Save the Pound

How Can a Virtual Office Help Your Business? →