Tax & NFTs, Blockchain & Metaverse… All you need to know!

Non-fungible token (NFT) is currently one of the most spoken about subjects in 2022. Before we go in the details about NFTs it’s important that we understand NFTs, Blockchain and Metaverse.

In the world of cryptocurrency, tokens are the king. A token is a thing that serves as a tangible representation of a fact, quality, and can be anything of value. Tokens are not limited and restricted to one specific role; rather, they can fulfil several roles in their native ecosystem.

Understanding the concept of an NFT

A blockchain is a distributed database that is shared among the nodes of a computer network. As a database, a blockchain stores information electronically in a digital format. Blockchains are best known for their crucial role in cryptocurrency systems. A database usually structures its data into tables. However a blockchain, like its name implies, structures its data into chunks (blocks) that are strung together. A blockchain collects information together in groups, known as blocks, that hold sets of information. Blocks have certain storage capacities and when filled, are closed and linked to the previously filled block – this forms a chain of data known as the blockchain. All new information that follows is compiled into a newly formed block that will then also be added to the chain once filled. The goal of blockchain is to allow digital information to be recorded and distributed, but not edited. In this way, a blockchain is the foundation for immutable ledgers, or records of transactions that cannot be altered, deleted, or destroyed. Therefore, blockchains are also known as a distributed ledger technology (DLT).

The word “metaverse” is a portmanteau of two words “meta-” and “verse”. The word “meta” is a prefix of Greek-origin meaning “beyond” while “verse” comes from the word “universe”. It was first used in literature by Neal Stephenson in his 1992 dystopian novel Snow Crash. In the book, the metaverse is presented as the ultimate evolution of the internet — a kind of virtual reality where any virtual interaction can have a direct impact on the real world too.

Metaverse is a combination of multiple elements of technology, including virtual reality, augmented reality and video where users “live” within a digital universe. Supporters of the metaverse envision its users working, playing, and staying connected with friends through everything from concerts and conferences to virtual trips around the world.

The internet is a network of billions of computers, millions of servers and other electronic devices. Once online, internet users can communicate with each other, view and interact with websites and buy and sell goods and services.

The metaverse doesn’t compete with the internet – it builds on it. In the metaverse, users traverse a virtual world that mimics aspects of the physical world using such technologies such as virtual reality (VR), augmented reality (AR), AI, social media and digital currency. The internet is something that people “browse”. But, to a degree, people can “live” in the metaverse.

So how does this all fit together

Non-fungible tokens (NFTs) play a big role in the usefulness and popularity of the metaverse. NFTs are a secure type of digital asset based on the same blockchain technology used by cryptocurrency. Instead of currency, an NFT can represent a piece of art, a song or digital real estate. An NFT gives the owner a kind of digital deed or proof of ownership that can be bought or sold in the metaverse. It also has the advantage to inbuild code so the owners could potentially build in royalties for each time these unique tokens are traded, used, or even viewed.  All real-life objects can be NFT’s on the metaverse and digital deed or proof will ensure the author perpetually benefits and generate income for the ownership of the token.

So, if you think you have some unique digital asset follow these steps:

The tech giant formerly known as Facebook has already made significant investments in virtual reality, including the 2014 acquisition of Oculus. Meta envisions a virtual world where digital avatars connect through work, travel or entertainment using VR headsets. Zuckerberg has been bullish on the metaverse.

Microsoft already uses holograms and is developing mixed and extended reality (XR) applications with its Microsoft Mesh platform, which combine the real world with augmented reality and virtual reality. Talk is it plans to launch mesh alongside teams to facilitate virtual meetings.

Roblox, the platform which was founded in 2004, houses scores of user-generated games. Such games include role-playing offerings like Bloxburg and Brookhaven, where users can build homes, work and play out scenarios. Roblox is now valued at more than $45 billion after going public this year.

Minecraft is another virtual universe loved by kids and adults alike. Minecraft is essentially the digital equivalent of Lego where players can create their own digital character and build whatever they desire.

HMRC recently published a manual on Crypto Assets. Here they were classed as assets and therefore capable of attracting capital gain taxes. HMRC has not yet published any details of NFT. But it’s likely NFTs will follow under income tax (where traded) or capital gains if classed they are as an asset.  HMRC also has written that all crypto exchanges under Paragraph 1, Schedule 23 of the Finance Act 2011 must provide details of customers with a UK address who hold assets over a certain amount in January 2022. They are likely going to follow the same outline for marketplaces/metaverse.

So, if you are trading in crypto/ NFTs speak to our experts to find out how to maintain the correct records, accounts and declare the correct amounts on your tax returns to avoid any future investigation and penalties from HMRC. Assuming HMRC treats crypto assets as a financial trade, below is an overview of what would be the most likely tax treatment for each activity. 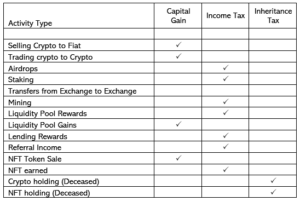 The activity of mining is still not considered as an economic activity within the scope of VAT and there are insufficient links between any service or product provided and any consideration. There is also no customers in the mining service so for the moment activities will be outside the scope. It’s most likely that HMRC will update to consider blockchain activities within the VAT scope once the regulations are in place

For the transfers of exchange tokens to fall within the scope of Stamp Duty or SDRT, they would need to meet the definition of ‘stock or marketable securities’ or ‘chargeable securities’ respectively.

This will be considered on a case-by-case basis, dependent on the characteristics and nature of the crypto asset, rather than any labels attached to them.

We can assist you with submitting a disclosure using the Digital Disclosure Service (DDS), which gives individuals and companies a chance to bring their tax affairs up to date.  Get in touch with us today on hello@outsourcedacc.co.uk or 0208 249 6007.