Too Much Space, Not Enough Mobility?

This article was written by Drew Callingham.

For the first time since records began, the number of people out of work was higher than the level of vacancies after a 0.3% percentage point fall in the unemployment rate to 3.7% in the UK.

Soaring bonuses for City bankers and high signing-on fees pushed Britons’ average annual pay up by 7% in March, but most workers suffered a fifth consecutive month of falling living standards. Without bonus payments, workers were paid an average 4.2% wage increase in the three months to the end of March, well below the 7% inflation rate recorded in the same month, according to the Office for National Statistics.

Analysts said the UK was suffering a chronic shortage of workers after about 500,000 quit the labour market during the Covid-19 pandemic and many continental European workers left Britain following Brexit. The unemployment rate fell to 3.7%, the lowest since 1974.

Before the release on Wednesday of annual inflation figures for April that are expecting to show a jump of more than 9%, the Institute for Fiscal Studies said the bonus culture adopted by employers was driving a bigger wedge between the higher paid and those on low incomes. The data showed that there was a rise in the number of people moving from economic inactivity – classed as those aged 16-64 who haven’t been working or seeking a job – into employment. The director of economic statistics at the ONS, said there was a rise in the number of people leaving unemployment to take up jobs and many people who had quit the labour market had returned to seek work, but it fell short of the number of needed by employers.

About 83,000 workers re-joined the job market in March, up from 10,000 in February and a consensus forecast by City economists of a meagre 5,000 increase. The fall in employment and rise in earnings add to pressure on Bank of England officials to increase interest rates further, though the relatively low level of average wage increases, and forecasts of a UK recession could stay their hand.

Illustrating the widening gap between the number of staff employers need and those seeking work or to move job, vacancies rose to a record of 1,295,000 in the three months between February and April – an increase of 33,700 from the previous quarter and a jump of almost 500,000 since March 2020.

The unemployment rate fell to 3.7% between January and March, its lowest for almost 50 years, as job openings rose to a new high of 1.3 million.

Pay, excluding bonuses, rose by 4.2% between January and March but failed to keep up with the rising cost of living – which hit 7% in March and is expected to go higher.

It meant that pay, when adjusted for the impact of rising prices, and excluding bonuses, dropped by 1.2% – the biggest fall since 2013. Pay has been failing to keep up with the cost of living for some months, as fuel, energy and food prices surge higher. Some blame this on the pandemic and the war in Ukraine, whilst other analysts claim this has been building up for some time and place blame with the powers that be for inactivity.

Official data on Wednesday is expected to show another sharp rise in the cost of living for April, reflecting last month’s hike in the energy price cap.

The Bank of England warned earlier this month that the cost crunch is set to leave the UK on the brink of recession, with inflation peaking at over 10% later this year and the jobs market slowing down.

Wages, excluding bonuses, failed to keep pace with rising prices, and this is a problem expected to intensify because of growing food and fuel costs, especially in October once the second round of energy hikes occur.

Look forward to an article from us to discuss the benefits and drawbacks of the windfall tax that is being discussed currently to help alleviate the energy crisis! 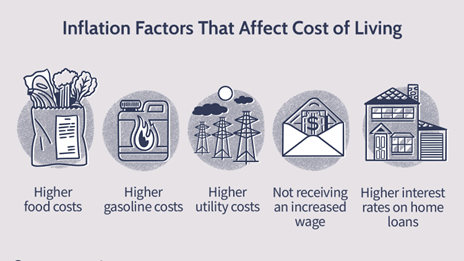 ← Perfectly Poised for a Place of Practical Principles

How Can You Prepare Your Business to Face the Upcoming Battles of 2022? →